The Rembrandt House Museum owns a special collection of paintings, which hang on the walls of the rooms in Rembrandt’s house. Most of them are by artists known as Pre-Rembrandtists-painters who were working in Amsterdam before Rembrandt moved there in 1631. The leading figure among them was Pieter Lastman (1583-1633), Rembrandt’s teacher in Amsterdam. The Rembrandt House Museum owns a great many important paintings by Lastman, some of which served Rembrandt as a source of inspiration. 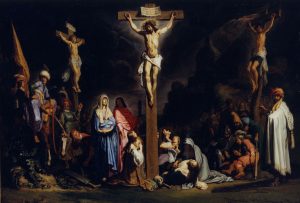 The painting depicts Christ’s crucifixion at Golgotha, the ‘Place of the Skulls’ outside Jerusalem. The two criminals are crucified on either side of Christ. Mary and St John stand by the cross, while Mary Magdalene kneels at its foot. Another Mary, the wife of Clopas, lies overwhelmed with grief in the arms of an old woman. Behind them soldiers cast lots for Christ’s garments (John 19: 17-30). There are four known crucifixions by Lastman. This painting is the most monumental of the four. 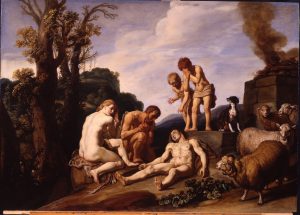 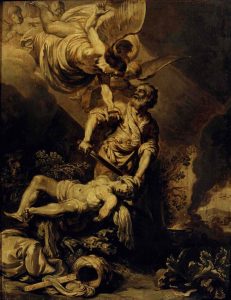 Pieter Lastman, The Sacrifice of Abraham, c. 1612 – On loan from Instituut Collectie Nederland

To test Abraham, the Lord ordered him to sacrifice his son Isaac. At the last moment, an angel stayed his hand. This event is depicted here. The angel points to Isaac with his left hand and towards heaven with his right. The ram that is to be sacrificed in Isaac’s stead can be seen in the thicket on the left (Genesis 22: 9-14). The scene is painted in shades of grey. A painting like this is known as a ‘grisaille’.
Rembrandt also painted this story several times. He studied under Pieter Lastman in Amsterdam for six months. Lastman had a considerable influence, both on Rembrandt’s work and on that of other painters. 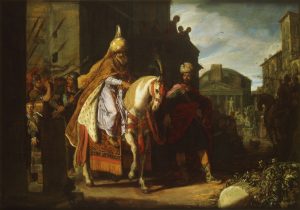 Pieter Lastmam, The triumph of Mordecai, 1617 – On loan from the Instituut Collectie Nederland

Esther’s Jewish foster father, Mordecai, thwarted a conspiracy against King Ahasuerus. The king wanted to thank Mordecai and asked his counsellor, Haman, who hated the Jews, how a king could best honour someone. Haman, who thought that he was the one being honoured, suggested that this person should be granted a triumphal procession through the city, dressed in the king’s clothes and riding the king’s horse. To his consternation, Haman was made to lead the horse with Mordecai on its back. This is the event depicted in the painting (Esther 6: 6-11). In about 1641 Rembrandt made an etching on the same subject, clearly inspired by his teacher’s painting. 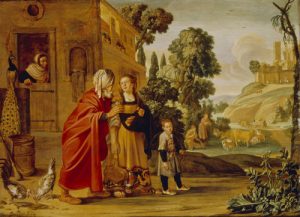 Jan Pynas, The expulsion of Hagar, 1614 – On loan from a private collection

Sarah bore Abraham a son when they were both very old. Sarah then compelled Abraham to banish his concubine Hagar and her son Ishmael into the desert (Genesis 21: 9-21).This was a favourite subject among Jan Pynas and his contemporaries, as it was later among Rembrandt and his pupils. An unusual aspect of this rendering of the story is the hoop held by Ishmael in place of the customary bow and arrows. 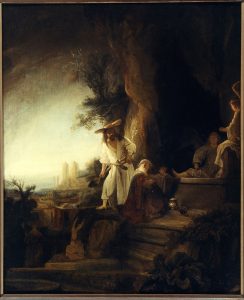 Ferdinand Bol after Rembrandt, Christ appearing to Mary Magdalene, after 1638 – On loan from Instituut Collectie Nederland

Ferdinand Bol received his early training in Dordrecht from Jacob Gerritsz. Cuyp, the father of Aelbert Cuyp. Bol spent the years from 1636 to 1642 working in Rembrandt’s studio. He was to become one of the most celebrated of Rembrandt’s pupils. Bol copied this picture from a painting by Rembrandt. After the resurrection Christ appears to Mary Magdalene as she kneels by the empty tomb, weeping. The spade he holds and the large hat are a reference to St John’s report that Mary Magdalene at first mistook Jesus for a gardener (John 20: 11-18).