The house where Rembrandt lived between 1639 and 1658 is a museum: Museum het Rembrandthuis or the Rembrandt House Museum. The building was constructed in 1606 and 1607 in what was then known as the Sint Anthonisbreestraat. The street did not come to be called the Jodenbreestraat until later. The house was built on two lots in the eastern part of the city. Many rich merchants and artists settled in this new part of town. The house can clearly be seen on a bird’s eye view map dating from 1625.

It is a substantial two-storey dwelling house with a stepped gable. In about 1627-28 the house was drastically remodelled. It was given a new façade, a triangular corniced pediment—the height of modernity at the time—and another storey was added. The reconstruction was probably overseen by Jacob van Campen, who was later to make his name as the architect of Amsterdam Town Hall (now the Royal Palace on Dam Square). 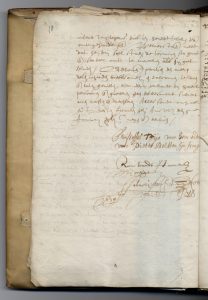 1639-1658
In 1639 Rembrandt signed a contract governing the payment for the purchase of the house in the Breestraat. The purchase price was thirteen thousand guilders, a huge sum, which he could not come up with in its entirety. He was, however, allowed to pay it off in instalments. At this time Rembrandt had already established his reputation as an artist. In the same year he bought the house, he was awarded the prestigious commission to paint the Night Watch. Although he was earning a lot of money, Rembrandt was unable—or unwilling—to pay off the mortgage. This was eventually to bring about his financial downfall. Between 1652 and 1656 Rembrandt made frantic attempts to get his hands on money to pay off his debt. He did not succeed and was forced into bankruptcy. In 1656 Rembrandt’s property was inventoried for the benefit of his creditors, and his household effects and collection of art and curiosities were sold. The house was auctioned in 1658 and fetched something over eleven thousand guilders. Rembrandt moved to a small rented house on the Rozengracht, where he lived until his death in 1669.

1658-1911
In 1660-62 Rembrandt’s former house was shored up and split into two. It was to house several different families up to the end of the nineteenth century. During this period the house was altered several times, and its condition deteriorated over the years. The house might well have been demolished had it not once had such a famous occupant. Action was taken on the occasion of the Rembrandt exhibition in 1906. The City of Amsterdam bought the dilapidated building and shortly afterwards handed it over to the Stichting Rembrandthuis, a foundation set up in 1907. The trustees of the foundation wanted to return Rembrandt’s former home as accurately as possible to the state it was in around the middle of the seventeenth century. The envisaged reconstruction did not, however, go ahead. The board opted for a contemporary approach without historical references. The Rembrandt House became the setting for a print collection. The drastic restoration was carried out under the supervision of the architect K.P.C. de Bazel. The restoration of the house was completed in 1911, and Queen Wilhelmina opened the museum.

In the museum’s early years the collection of etchings grew steadily as a result of gifts and purchases. There were temporary exhibitions at regular intervals, but few changes were made to the interior of the house. But then, in the nineteen-nineties, there were some major developments. The trustees succeeded in acquiring the adjacent premises, enabling them to build an extension to the museum. The façade of the new building was designed by the architects Moshé Zwarts and Rein Jansma, the interior by Peter Sas. The new wing, which was opened on 7 May 1998, houses two exhibition galleries, the secretarial department, offices and the library, with the Rembrandt Information Centre. Once the new wing was completed, it was possible to resurrect the old plan to restore Rembrandt’s former home to its original condition. The reconstruction did not progress without a hitch. Champions and opponents of the plan conducted a fundamental debate about the ethics of the restoration of historic buildings. Once the board of the Rembrandt House was given the go-ahead, the work proceeded very carefully. In order to tackle the restoration plans as meticulously as possible, a restoration team was put together. It was headed by the building historian Henk Zantkuijl, an expert in seventeenth-century houses. The plan was based on historical knowledge built up over many years. There was also a thorough study of available sources. The inventories of the house were very important—the inventory of 1626 belonging to the first occupant of the house and, in particular, the inventory that was compiled in 1656 because of Rembrandt’s bankruptcy. This latter source enabled the experts to work out how the house was laid out during this period and how Rembrandt had used the different rooms. Some of Rembrandt’s drawings and etchings provided additional information . The structural drawings for the restoration were made by architect Maarten Neerincx in consultation with Zantkuijl. The work was done by the firms of Kneppers and Midreth. The restoration was completed in 1999. 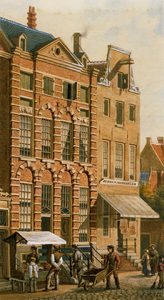 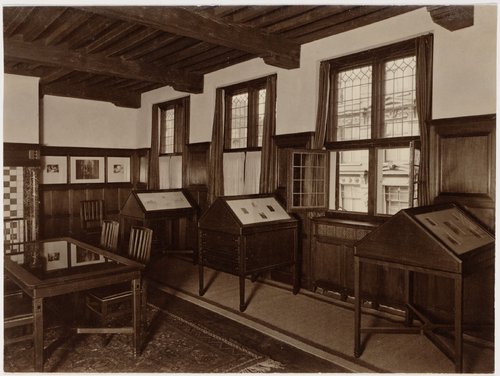