Rembrandt took on his first pupils at the age of twenty-two, while he was still living in Leiden. From the moment he started his own workshop in Amsterdam he attracted more and more. He probably taught more than fifty pupils. His approach to teaching was traditional, but he introduced unusual elements. He taught his pupils the rules of art but added his own. His curious and probing nature led to continual development and innovation in his own work; in his teaching methods he also looked for different ways of imparting his technical skills to his talented students—methods we can learn from today. 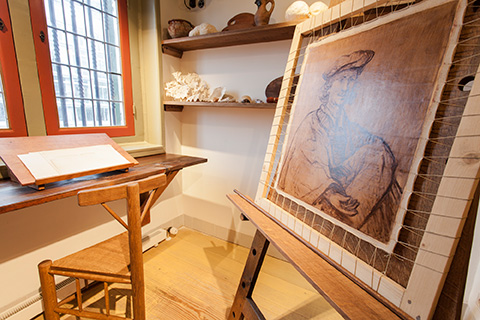 Rembrandt already had a number of pupils in his early years in Leiden. In Amsterdam the number grew significantly, particularly between 1640 and 1650, from his early thirties on. When he first arrived in Amsterdam, he taught in the art dealer Hendrick Uylenburgh’s house, which was next door to the present-day Rembrandt House. Later, when Rembrandt had bought the adjoining building, lessons were given there. The pupils had their own workplace in the ‘Cleyne Schildercaemer’, or Small Studio, which could accommodate around five of them at one time. They were often separated by partitions made of wood, cloth or paper.

There were three types of pupil in Rembrandt’s workshop. Firstly there were the pupils aged between twelve and fourteen, boys who wanted to become painters in their own right. When pupils like that came to Rembrandt, they had usually already served an apprenticeship with another artist. In the second group were the assistants, like Ferdinand Bol and Samuel van Hoogstraeten, who after training with Rembrandt remained in the workshop and helped with instruction and production. They were painters who made their own paintings in the style of the master, some of which are considered to be genuine Rembrandts to this day. Finally there were the ‘amateurs’, who took drawing and painting lessons as part of a good upbringing and did not need to make a living from painting—painters like Leendert van Beyeren and Karel van der Pluym.

Rembrandt did not teach all his pupils the same thing; it could vary from refined painting to painting with a coarse brush. Pupils did, though, cultivate what they had picked up in their own way. Rembrandt’s first pupil in Leiden, Gerrit (Gerard) Dou (1613-1675), developed an extremely precise way of painting, whereas one of his last pupils in Amsterdam, Aert de Gelder (1645-1727), remained faithful to Rembrandt’s expressive handling of paint. Teaching was a lucrative business; Rembrandt received around a hundred guilders tuition fees a year for each pupil. His contemporary, the German artist Joachim von Sandrart, maintained that Rembrandt earned some two and a half thousand guilders a year from tuition fees, and on top of that put the money he got from selling pupils’ work into his own pocket. By comparison, a trained craftsman earned around two hundred and fifty guilders a year at that time.

Read all about Rembrandt’s pupils.