One of Rembrandt’s most famous works is the painting known as The Jewish Bride. The painting acquired this name at the beginning of the nineteenth century, but the subject of the picture remains a mystery to this day. Is it an Old Testament couple? Or is it a double portrait of two of Rembrandt’s contemporaries? It could also be a combination of both possibilities—a man and a woman who had themselves immortalized as biblical figures. This is known as a portrait historié, a historicized portrait. If this is the case, most art historians believe that the couple represent Isaac and Rebecca. Another, more neutral explanation is that the man is declaring his love to his wife. In that case the subject of the painting would be the virtue of marriage. As well as the uncertainty as to the subject, we also do not know the year in which Rembrandt painted this work. It is dated to about 1666. Rembrandt applied the paint very roughly in this painting. The paint on the man’s sleeve is so thick that it seems as though Rembrandt used a palette knife to put it on. 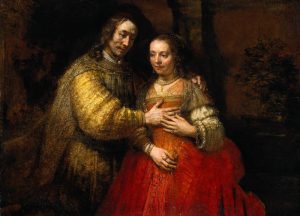