Rembrandt painted this group portrait of seven surgeons and the physician Nicolaes Tulp in 1632. The painting is one of a series of group portraits that were made for the board room of the Guild of Surgeons, the earliest of which dates from 1603. An anatomy piece of this kind has a central motif, an anatomy lesson, and a protagonist, the praelector or reader. This painting was occasioned by the anatomy lesson that Tulp gave in January 1632. Twice a week a leading physician gave the Amsterdam surgeons a theory lesson. One element of this extra training was attendance at practical demonstrations in the anatomy theatre in order to gain a greater understanding of human anatomy. There was one public autopsy each year, conducted in the winter because the stench of the body would have been unbearable at any other time. The dissection was carried out under the supervision of the praelector. He did not necessarily do this every year, but Tulp, who had become reader of the Guild of Surgeons three years earlier, performed his first autopsy in 1631 and his second in 1632. It was of this occasion that Rembrandt made his famous painting. 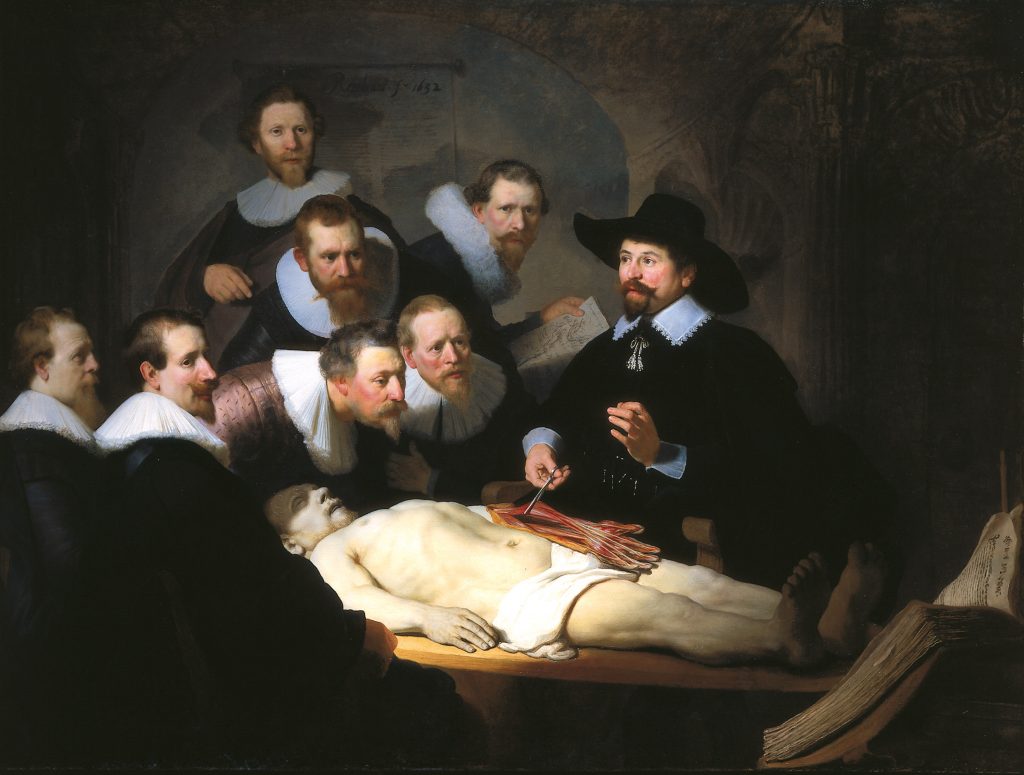 The artistic achievement of the young painter is astounding, particularly since he had painted relatively few portraits up to this time. It looks as though Rembrandt captured the men at a specific instant in time, but in fact the painting is a careful and very well thought out composition. The viewer’s attention is focused on Tulp, who demonstrates how the muscles of the arm are attached. The corpse’s arm has been laid open for the purpose. The body used for these public autopsies was usually that of a criminal, in this case Adriaen het Kint. The names of the men portrayed in the picture are listed on the piece of paper held by the man at the back.