Where the Nieuwmarkt is now and the Zeedijk and the Wallen begin was once the city boundary. The Waag was a city gate in the fifteenth century. As the city expanded so the building was absorbed into it and in the seventeenth century the gate was converted into a weigh house. Several guilds, including the painters’ guild, met on the top floor. On two occasions Rembrandt painted a group portrait for the guild of surgeons in the form of an ‘anatomy lesson’. One is in the Mauritshuis in The Hague, and the other—the surviving part of a large painting that was damaged in a fire—is in the Amsterdam Museum. 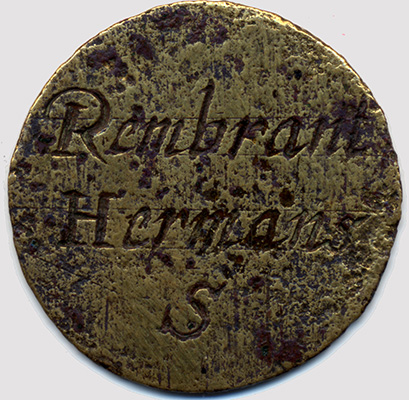 The Waag
Everyone who joined a guild was given two medallions: a membership medallion and a funeral medallion. The new member took the former home with him; the funeral medallion was retained by the guild—in Rembrandt’s case in the Waag. It is quite extraordinary that Rembrandt’s funeral medallion has survived. It is no surprise that his name is spelt ‘Rembrant’. Even he did not always spell his name the same way. The ‘Hermans’ indicates that Rembrandt’s father’s name was Harmen or Hermanus. At the start of his career Rembrandt often used his full name: Rembrandt Harmenszoon van Rijn. The ‘S’ stands for ‘schilder’, the Dutch word for painter. The three empty escutcheons on the back refer to the three trades originally united in the guild: painters, sculptors and glass-cutters. Above the three escutcheons is the year 1634. That Rembrandt did not become a member of the guild until then may have to do with the fact that a man had to be registered as a burgher of the city for a least a year before he was allowed to join.

The Oude Kerk
The Oude Kerk represented both love and grief for Rembrandt. It was the church where he and Saskia published the banns of their marriage and where Saskia was buried in 1642, at just twenty-nine. Twenty years later Rembrandt’s financial situation forced him to sell Saskia’s grave. Today there is a commemorative plaque at the spot where her body once lay. Cornelia, the daughter of Rembrandt and his mistress Hendrickje Stoffels, was baptized in the church on 30 October 1654. The Oude Kerk now stands in the middle of the red light district, but the history of this venerable building goes back to the mid-thirteenth century, when Amsterdam was still a small settlement near the dam in the River Amstel. It was originally a Catholic church, dedicated to St Nicholas, the city’s patron saint. When a second church was built near the dam in the early 1400s, the first church became known as the Oude Kerk—the old church. After the Alteration in 1578, when a Protestant coup deposed Amsterdam’s Catholic administration, the church was used by the Protestants.

Houtkopersgracht 25: The House of Ephraim Bueno

Vlooyenburg – now Waterlooplein – was home to many Jewish families, immigrants who had fled from Portugal or Spain. The Portuguese doctor, Ephraim Bueno, lived at number 25 Houtkopersgracht. Bueno (1599-1665) was a Portuguese Jew, and a doctor, poet and translator of Spanish. He was one of the backers and clients of Menasseh ben Israel’s printing business. Menasseh lived opposite Rembrandt. Rembrandt began by making a preliminary study of Bueno in oils, half-length. He then based this etching on the painted study, expanding the composition on all sides. Bueno is shown from the knees up with his hand resting on a banister. He wears a cape slung over his left shoulder. 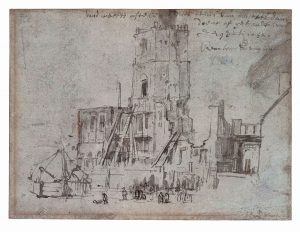 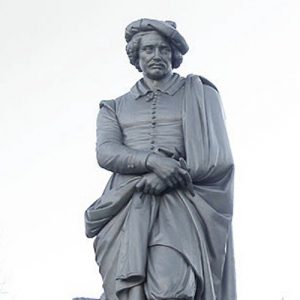 From Botermarkt to Rembrandtplein
Present-day Rembrandtplein has not always been named after the great artist. It was not until the nineteenth century that national pride grew stronger in the Netherlands and people began to show an interest in the 17th century and its representatives, such as Rembrandt van Rijn. After the new country of Belgium had literally placed their hero Peter Paul Rubens on a pedestal, the Netherlands could not be left behind. Rembrandt was hailed as a hero at a time when many people, mainly in Calvinist circles, still regarded him as uncultured and coarse. In the seventeenth century, present-day Rembrandtplein was a butter and poultry market called the ‘Botermarkt’. In 1852 a statue of Rembrandt made by the Flemish sculptor Louis Royer (1793-1868) was erected on one side of the square. The statue was moved to the centre in 1876 and the square was renamed Rembrandtplein.


Diemerdijk
Is there anyone living in a town who doesn’t want to get a breath of fresh air? Rembrandt must have often strolled along the Sint Anthonis or Diemerdijk. He made many sketches there. Sint Anthoniesbreestraat, where Rembrandt lived for twenty years, joined the Sint Anthonisdijk, the sea dike that protected Amsterdam and Amstelland from the waters of the IJ and the Zuiderzee. The dike was also known as the Diemer Zeedijk, or Diemerdijk, because you could walk along it to Diemen.

This etching depicts the dike in mirror image. We are looking east from the dike; on the right we can see the Zuiderzee and on the left the low-lying farmsteads. Rembrandt took great pains to achieve the painterly effect of sunlight and shadow on the clump of trees. In the foreground a man carries two buckets on a yoke over his shoulders. A happy dog skips beside him. Rembrandt added a couple of imaginary hills in the background on the left in the second state of the print.

In the year he was commissioned to paint The Night Watch, Rembrandt also made this etching of ‘The Little Stink Mill’. At some time in the seventeenth century someone wrote a note on the back of the print mistakenly describing the mill as one that had been owned by Rembrandt’s grandfather. The print shows a rural scene. At the beginning of the twentieth century a large part of the Amsterdam we know today was still countryside. Until recently the St Bernard old people’s home was located on the corner of present-day Marnixstraat and Passeerdersstraat.

In the seventeenth century it was the site of the Passeerder rampart, later renamed the Osdorp rampart. It was one of the nineteen fortifications of the city wall. This part of Amsterdam’s line of defence was completed between 1611 and 1613. On this exact spot there was a mill that Rembrandt recorded twice, in a drawing and in an etching. ‘The Little Stink Mill’ was owned by the chamois leather workers’ guild and was used to soften tanned leather by treating it with cod liver oil. The mill’s name probably came from the smell it produced. In this type of mill—known as a smock mill—the cap could be turned with the aid of a tail-pole and a capstan wheel. 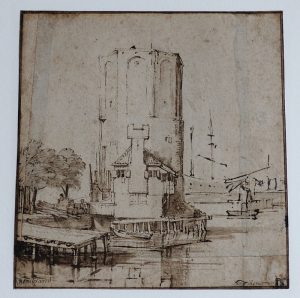 Montelbaanstoren
We can still recognize many of the places in seventeenth-century Amsterdam in drawings and prints that Rembrandt made in the neighbourhood surrounding his house. There was once a bridge opposite the present number 33 Oudeschans, not far from the Rembrandt House. It was from that spot that he made this drawing of the Montelbaanstoren. In the drawing we can see the harbourmaster’s house, built on piles, in front of the tower. Rembrandt did not draw the wooden spire; perhaps he thought that the solid shape of the old tower was more attractive without it. The tower at number 2 Oude Schans was built in in 1516 as a defence tower, but by the seventeenth century it was being used as a warehouse. In 1606 the building was topped with an ornamental steeple in Renaissance style, to a design by Hendrick de Keyser, and given a clock and a peal of bells. Four years later the tower began to subside dramatically and had to be pulled upright with cables. The foundations, which originally consisted of cut peat, were reinforced with a circle of bricks.

If you look closely you can see a courting couple in the bushes. The casual observer sees only a view of De Omval. In Rembrandt’s time De Omval was a rural area at a bend in the Amstel, where residents of Amsterdam would often go for a pleasant day out. A man wearing a broad-brimmed hat stands on the Amsteldijk. Above his shoulder is the entrance to the ring canal around the Watergraafsmeer and one of the mills used to pump the water out of the polder. 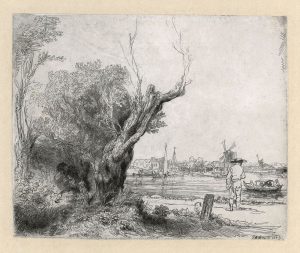 On the extreme right is the dark mouth of a brick culvert. Sailing boats are moored near some houses. A group of people are being rowed across the Amstel in a boat with a canopy. The main feature of the etching, however, is a gnarled willow. In the shadow of the tree sits a hidden couple; the boy is putting a garland of flowers on the girl’s head. De Omval was originally a spit of land between the Watergraafsmeer, which was drained in 1629, and a bulge near the bend in the Amstel. This bulge was called the Windrak. De Omval itself was named after the ruins of a house that once stood there. It is now the site of the Rembrandt Tower, Amsterdam’s tallest building. The building, beside Amstel Station, is 135 metres high and can be seen from a considerable distance day and night.