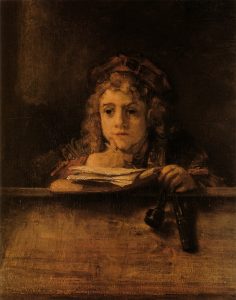 The boy, who sits staring ahead, is lost in thought. His thumb presses against his chin. There are some papers on the desk, and he holds a pen in his right hand and a pen case in his left. That this is a portrait of Rembrandt’s son, Titus, is not in doubt. An important clue to this is that there are several other paintings by Rembrandt from the same period that unmistakably show the same boy. There is, moreover, a strong similarity between this work and the portrait etching of a boy by Rembrandt, which a seventeenth-century source tells us is of Titus (fig.2). In the print, Titus wears a beret just like the one in the painting. 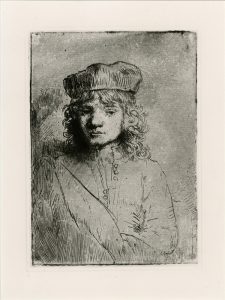 Titus, who was born in 1641, was the only one of Saskia and Rembrandt’s children to live beyond infancy. Titus’s mother died less than a year after his birth, and he was brought up by his father and by Geertje Dircx. In 1649 Geertje’s place was taken by Hendrickje Stoffels. We have virtually no information about Titus’s childhood. We do, however, know that he was taught drawing and painting, undoubtedly by his father. The inventory of Rembrandt’s possessions that was compiled in 1656 lists a couple of works by Titus. Once the bankruptcy formalities were completed, the art dealing business was transferred into the names of Hendrickje and Titus in order to keep the income from it out of the hands of Rembrandt’s creditors. Titus was actively engaged in the art business. In the biography of Rembrandt, written at the beginning of the eighteenth century by the artist and writer Arnold Houbraken, the author notes rather disparagingly that Titus hawked his father’s prints around. When he was in Leiden in 1665, Titus tried to win a commission for his father. On that occasion Titus proudly extolled his father’s qualities. Three years later Titus was back in Leiden. Mortally ill, he made his will and died shortly afterwards.