The seventeenth century saw an unparalleled output of art in the Republic of the United Provinces. The number of paintings and prints produced during this period is staggering, and very many of them are of outstanding quality. Perhaps the most famous painting is the work by Rembrandt known as The Night Watch. It is a group portrait of a militia company. These were groups of able-bodied men who, if the need arose, could be called upon to defend the city or put down riots. The painting depicts the company of Captain Frans Banning Cocq and his lieutenant, Willem van Ruytenburgh, surrounded by sixteen of their men. A shield above the gate bears the names of the eighteen people in the portrait, who paid for the work. The other people who appear in the painting were added by Rembrandt with an eye to enhancing the composition. He must have been given the commission in 1639 or soon afterwards. It is no coincidence that Rembrandt bought an expensive house at precisely this time.

The militiamen met at fixed times in the Kloveniersdoelen. This was the range where they practised. It was decided to commission six large militia pieces and a group portrait of the officers for the main hall of the building. Rembrandt was commissioned to paint one of the six large works. He decided on an audacious composition. The men are in action, busy forming up. The way that Rembrandt has arranged the figures creates immense vitality. This is reinforced by the striking use of light and shade. The men appear to be emerging from a dark gateway into the light. The girl to the captain’s left is in full light. She symbolizes the Kloveniers. The claws of the chicken hanging from her belt refer to the name ‘clauweniers’. She clasps the Kloveniers’ ceremonial drinking horn. 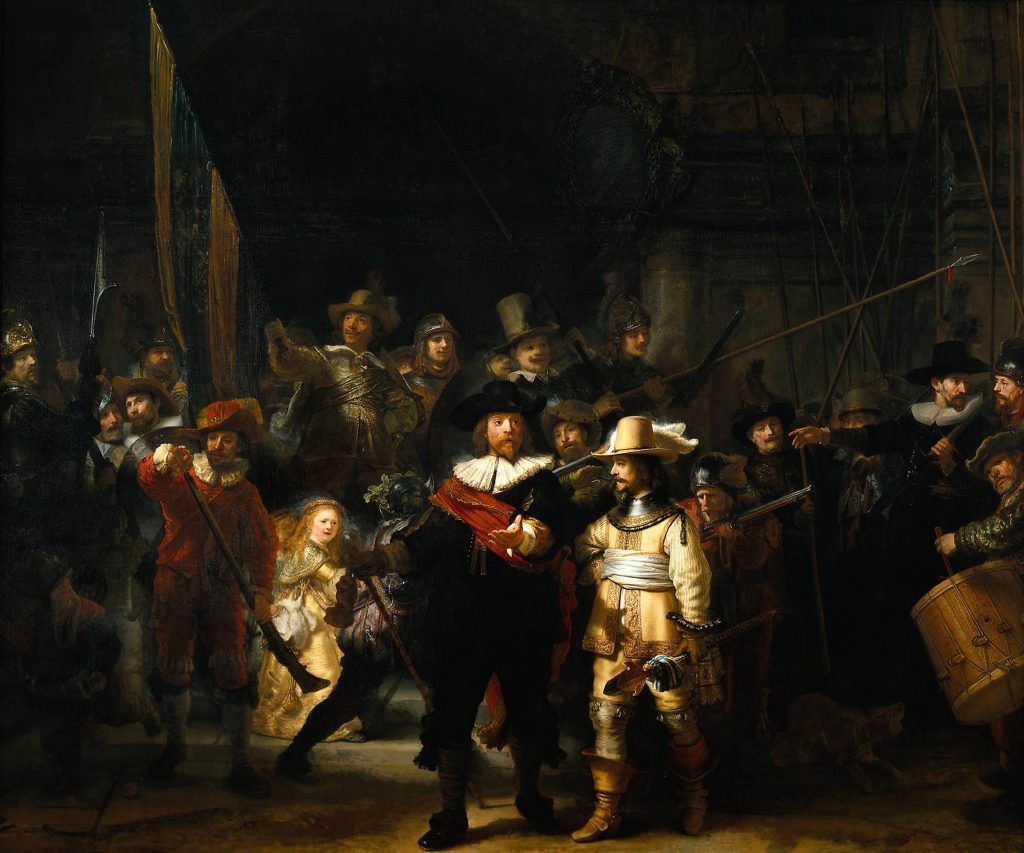 Rembrandt did not confine himself to a single technique. Some elements are worked out in minute detail, while in other places he seems to have applied the paint very thickly. Technically it is a masterly piece of work. The captain’s hand, for instance, seems to be coming out of the painting towards the viewer. Contemporaries were very well aware of the quality of this painting. Rembrandt’s former pupil, the art theoretician Samuel van Hoogstraten, wrote about it in terms of great admiration. He pointed out that the composition and unity were more important to Rembrandt than the individual portraits. He described the work as strikingly ‘picturesque in conception’ and ‘elegantly’ and ‘powerfully’ done. This is what sets this painting apart from the other militia pieces that were made at the same time.

Samuel van Hoogstraten also had a criticism. He wished that Rembrandt ‘had put more light into it’. The name Night Watch dates from the eighteenth century, when the painting had already darkened quite considerably. By then, people were no longer sure precisely what it represented. They evidently took it for a night scene.