The large kitchen in Rembrandt’s former home was the focus of everyday life and the heart of the home. This is where the family spent much of their time, cooking, eating, talking. The fire in the hearth was never allowed to go out. The stove was a fairly modern development in the seventeenth century. It meant that the heat could be used more efficiently. The smoke went up the broad flue.

There is also a box bed here, probably for the maid to sleep in, close to the fireplace. The box bed seems small, but there’s a reason for that. In the seventeenth-century people slept sitting half upright, for fear that they might die of a rush of blood to the head if they lay flat. People were also smaller then than we are nowadays, as we can see from the height of the door to the yard and the low sink. The pump by the sink provided water, but it was not clean enough to drink. In the seventeenth century, most people drank a weak beer known as small beer. Wine was expensive and kept for special occasions.

In 1649, it was the scene of a huge argument. As we know from a document, Rembrandt wanted to break with his former mistress, Geertje Dirckx. It was here that the parties met to draw up an agreement about Geertje’s alimony, but the negotiations were anything but amicable. According to witnesses, Geertje attacked Rembrandt “very violently and unreasonably”. 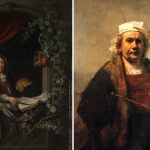