According to the inventory, Rembrandt kept a large number of rare and valuable items in this room. Some rich, erudite people had collections like this, but it was extremely unusual for an artist. Rembrandt spent a lot of money on it. The items came from all over the world. They were displayed on the shelves around the walls.

The rare objects were things from the natural world, like the two turtle shells, and man-made artefacts like “A cabinet of coins”; a small cabinet for storing coins and medals.

Rembrandt also had a large collection of plaster portrait busts of Roman emperors and Greek philosophers. They were essential tools of the trade for a history painter who wanted to depict stories and events from classical antiquity. And as part of their training, his pupils had to learn to draw plaster statues.

Rembrandt also owned many seashells and corals. According to classical principles, Nature was divided into three classes: animals, plants and minerals. Seashells, part of the animal kingdom, were popular collectors’ items. Rembrandt used seashells from his collection in several of his works.

Rembrandt’s ‘art books’ were his most valuable possession. He owned seventy albums containing some 8,000 drawings and prints, including the work of Dutch artists such as Jan Lievens, Maerten van Heemskerck and Lucas van Leyden. And he also owned work by famous foreign artists like Titian, Michelangelo and Hans Holbein. Rembrandt used the prints and drawings when teaching his pupils, for himself as a source of inspiration and as part of his stock in trade. 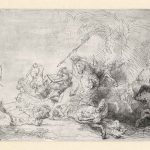