Rembrandt was not only a celebrated artist and teacher, he was also an avid collector of art and all kinds of inspirational objects. These objects were kept in a room in Rembrandt’s house that was designed solely for this purpose: the art room. Every week, we highlight an object from Rembrandt’s own collection. This week: the etching by Lucas van Leyden, A beggar family (‘Uylenspiegel’), 1520.

Rembrandt’s acquaintance Joannes Wtenbogaert was an avid print collector, who kept his collection in albums. In his collection there was, amongst other artworks, a collage of print fragments by Lucas van Leyden. This composition of fragments was later taken apart, but the accompanying handwritten text from the seventeenth century has been preserved. It says, loosely translated: ‘for this print, Rembrandt has paid 250 guilders.’ This is one of the valuable sources that states how much Rembrandt was willing to pay for a print by Lucas van Leyden. One print by Lucas van Leyden was exceptionally coveted, because it was very rare: a depiction of a beggar family, known in Dutch as ‘Uylenspiegel’.

Ernst Brinck, a mayor from Harderwijk, wrote in 1642 that ‘the esteemed painter Rembrandt’ had purchased this print by Lucas van Leyden for 179 guilders. It was this expensive because ‘it was hard to come by’. Joachim von Sandrart, an artist and art historian, also wrote in 1675 that Rembrandt had paid 1400 guilders for fourteen good prints by Lucas van Leyden. This was confirmed by Rembrandt’s pupil Samuel van Hoogstraten. He wrote in 1678 that he had witnessed Rembrandt paying 200 guilders for an ‘Uylenspiegel.’ In comparison: a trained craftsman in the seventeenth century earned about 250 guilders a year. 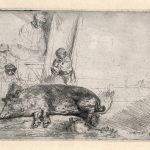