From 1638 until 1658 Rembrandt lived and worked in his house on the Jodenbreestraat, currently The Rembrandt House Museum. After his bankruptcy, he was forced to sell his home in 1658. Rembrandt then moved to a rental home at the Rozengracht no. 184, together with his beloved Hendrickje Stoffels, his son Titus and daughter Cornelia.

At this address the family opened an art dealership, under the names of Hendrickje and Titus. This way Rembrandt could still sell his work, without having to surrender his earnings to his creditors. In his years on the Rozengracht Rembrandt painted several of his most famous artworks, like The Syndics of the Drapers’ Guild (1662), The Jewish Bride (c. 1665) and his final self-portraits from 1669. Rembrandt remained in this home until his death on October 4th 1669.

You can still find no. 184 on the Rozengracht, although the current building was built later, long after Rembrandt’s death. In memory of Rembrandt there is a stone tablet above the middle window on the first floor. The inscription reads (translated from Dutch): ‘HERE | STOOD | REMBRANDT’S | LAST | HOME | 4-10-1669’. 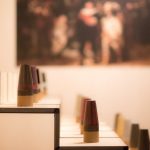 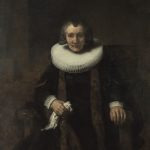