The painting by Rubens shows a scene from Greek mythology: the titan Prometheus had stolen the fire of the gods on the Mount Olympus to give it to humanity. Zeus, king of the Olympian gods, resolved to punish Prometheus. Prometheus was chained for eternity to a stone, and every single day an eagle would come to pick away at his constantly rejuvenating liver. For this painting Rubens collaborated with the (animal) still life painter Frans Snyders, who painted the eagle. Rubens considered this painting one of his most important works.

Rembrandt’s painting also shows a gruesome scene, this time from the Old Testament of the Bible. Samson was a judge with extraordinary powers: he was invincible. His beloved Delilah wanted him to share the secret for his strength with her, as proof of his love. This turned out to be a trap; the Philistines promised Delilah great fortune in exchange for the secret of their enemy. After Samson had told her that he would lose all of his strength as soon as his hair was cut off, Delilah cut his hair when  he was asleep. Rembrandt’s painting shows the subsequent moment, when the Philistines overpower the weakened Samson and blind him.

The odds are high that Rembrandt saw Rubens’ painting when he was living in Leiden. At that time the painting was part of the collection of Sir Dudle Carleton, who was the English ambassador in The Hague from 1616 until 1628. Rembrandt undoubtedly wanted to measure himself against Rubens, whom Constantijn Huygens had called “the Apelles of our time”; Apelles was Alexander the Great’s court painter and considered to be the greatest painter of Antiquity. Rembrandt’s wish to emulate Rubens is expressed spectacularly in The Blinding of Samson; it is his most violent work of art.

Both Rubens and Rembrandt have placed the male figure diagonally in their painting, with foreshortening in the bodies. But where Rubens focuses on presenting the classical idea of the male body with an accentuated depiction of the muscles, Rembrandt has placed the focus on the emotion in this scene. Samson is not an example of classical perfection; Rembrandt even depicted him clothed. Rembrandt has exceeded Rubens in the expression of pure agony and pain in the face, the clenched fists and – especially – in the curled toes of Samson. 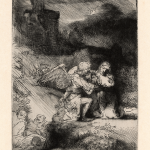 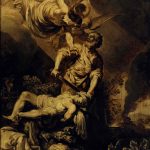