In ‘Rembrandt Curated’ we combine an artwork by Rembrandt with a work by another artist. The two works evoke associations with one another, whether it is the theme, composition, colour scheme, or just a feeling. This week we will be looking at two artworks that have a clear connection with one another: Jacques Callot, Beggar standing, c. 1622 and Rembrandt, Beggar seated on a bank, 1630. 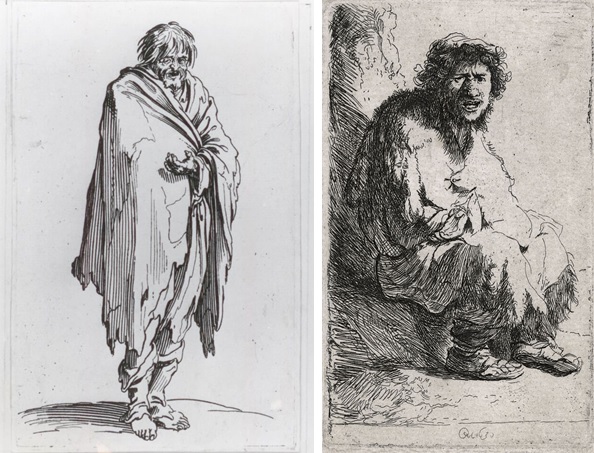 As the basis for his etching of a beggar with his hand outstretched, Rembrandt used an etching of a beggar by the French artist Jacques Callot. Callot’s etching is part of a series of prints of beggars (Les Gueux) that inspired a great many artists. The figure is shown against a blank background. The beggar is wearing ragged clothes and his feet are bare. He appears to be saying something, while his hand is outstretched to receive alms. Like Jacques Callot, Rembrandt produced a great many small prints showing one or more beggars. This seated beggar shows significant similarities to Callot’s Beggar standing -the expression on the beggar’s face, his ragged cloak and his outstretched hand. In Rembrandt’s etching, the face is more expressive of the hard life a beggar suffered. Another difference is that Rembrandt has shown a bank in the background. 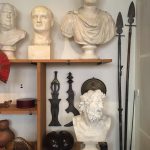