In ‘Rembrandt Curated’ we combine an artwork by Rembrandt with a work by another artist. The two works evoke associations with one another, whether it is the theme, composition, colour scheme, or just a feeling. The ‘Rembrandt Curated’ of this week: Rembrandt, The Anatomy Lesson of Dr. Nicolaes Tulp, 1632 (Mauritshuis, The Hague) and Henri Gervex, Before the Operation, also called Dr Péan Teaching His Discovery of the Compression of Blood Vessels at St Louis Hospital, 1887 (Musée d’Orsay, Paris).

Rembrandt painted his group portrait of seven surgeons and the physician Nicolaes Tulp in 1632. The painting is one of a series of group portraits that were made for the board room of the Guild of Surgeons, the earliest of which dates from 1603. An anatomy piece of this kind has a central motif, an anatomy lesson, and a protagonist, the praelector or reader. This painting was occasioned by the anatomy lesson that Tulp gave in January 1632. Twice a week a leading physician gave the Amsterdam surgeons a theory lesson. One element of this extra training was attendance at practical demonstrations in the anatomy theatre in order to gain a greater understanding of human anatomy. There was one public autopsy each year – It was of this occasion that Rembrandt made his famous painting.

The artistic achievement of the young Rembrandt is astounding, particularly since he had painted relatively few portraits up to this time. It looks as though Rembrandt captured the men at a specific instant in time, but in fact the painting is a careful and very well thought out composition. The viewer’s attention is focused on Tulp, who demonstrates how the muscles of the arm are attached. The corpse’s arm has been laid open for the purpose. Rembrandt has given the painting a dynamic feel by applying a strong light-dark contrast.

Gervex’ painting (seen on the right), called Before the Operation in short, was regarded by some contemporary critics as a modern transposition of Rembrandt’s painting. Like his predecessor, Gervex shows the doctor surrounded by his assistants and his pupils beside the corpse, the subject of the experiment. But unlike Rembrandt, Gervex has chosen a vertical composition, a bit off-centre, with a different angle. He has placed the corpse more in the foreground of the composition, pushing the men into the background, which gives the scene more of a dramatic feel. Gervex has replaced the medical book in the foreground of Rembrandt’s painting with a set of surgical instruments, laid on a white cloth, as an indicator of the most recent scientific progress. This painting was presented at the famous Salon de la Société des Artistes Français in 1887. 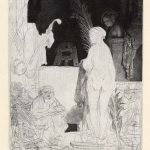