The book of Esther describes the vicissitudes of the Jews in exile in Persia in about 475 BC. One of them, Mordecai, discovered a conspiracy against King Ahasuerus, who was married to his foster-daughter Esther. When Ahasuerus wished to express his gratitude he asked his advisor Haman – a fierce opponent of the Jews – what should be done for the man whom the king wished to honour. Haman, assuming that he himself was the recipient of this reward, suggested that the man be dressed in the king’s clothes and led through the city on the king’s horse. Ahasuerus immediately ordered him to do so with Mordecai. Here Rembrandt shows us the triumphal procession in honour of Mordecai. In the top right of the picture we see King Ahasuerus and Queen Esther watching from a balcony.

Rembrandt is one of the greatest graphic talents of all time. From April 28th until July 23rd 2017, The Rembrandt House Museum is staging an exhibition in which the magnificent etchings by Rembrandt are on display: Rembrandts etchings: Highlights of the Rembrandt House collection. A selection of some thirty etchings from the museum’s collection will give visitors insight into the artistic and technical aspects of Rembrandt’s printmaking. 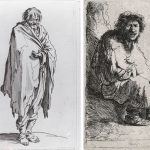 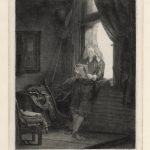