The Conspiracy of the Batavians under Julius Civilis

In 1648, the year that the Treaty of Münster put an end to the Eighty Years’ war, work started in Amsterdam on the building of a new Town Hall, now the Palace in Dam Square. A considerable sum of money was earmarked for it, in order to make it a really impressive edifice. The town hall was to be an expression of the power of the City of Amsterdam. Great pains were also taken with the interior. The decoration of the gallery around the Burgerzaal was executed at a later date. In 1659 Govert Flinck was contracted to paint twelve works for the gallery, with scenes from the uprising of the Batavians against the Romans. This former pupil of Rembrandt’s was promised the vast sum of 12,000 guilders for the work. Shortly after the commission was awarded, Flinck died. The city council then entrusted the work to several different artists. Rembrandt received one commission, to paint The Conspiracy of the Batavians in the Schakerbos with the one-eyed Julius Civilis, also known as Claudius Civilis. 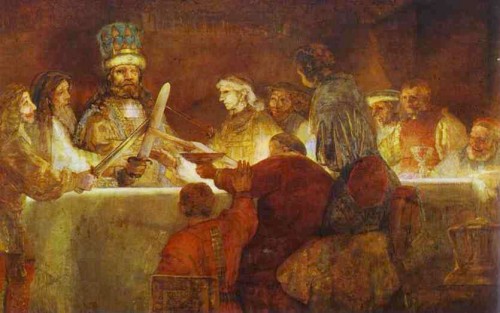 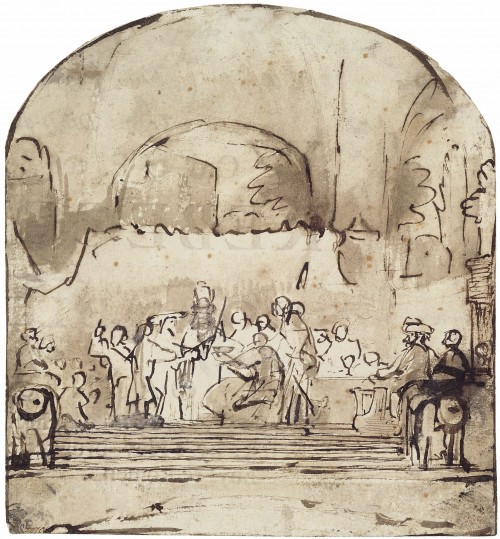 As far as we know, this is the largest painting that Rembrandt ever made. It must have measured at least five and a half metres square. The painting was installed in the town hall in 1662, but was then taken out again. We do not know why. Were the burgomasters dissatisfied because the depiction of the subject was too true to life? Or did they not like the finishing? Rembrandt was supposed to make the necessary modifications, for which he would not be paid anything extra. Was Rembrandt unable to reach agreement about payment with his clients? Whatever the reason, the painting went back to Rembrandt, who must subsequently have cut the central part out. This fragment has been in Sweden since the eighteenth century (fig.1). We know roughly what the painting looked like because Rembrandt made a sketch of the whole picture on an odd scrap of paper (fig.2).

Rembrandt, The Conspiracy of the Batavians under Julius Civilis. Pen and brush in brown, brush in white, 19.6 x 18 cm., Munich, Staatliche Graphische Sammlung (Be. 1061)