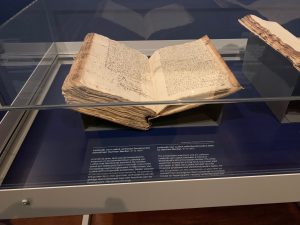 Today, 31 December 1664,
before me, Joannes Hellerus,
notary public admitted to the Court of Holland,
residing in Amsterdam, appeared
Messrs. Abraham Fransz, 51 years of age, and
Thomas Asselijn, 44 years of age,
residents of this city, and at the request
of Mr. Rembrant van Rijn, painter,
residing here on Lauriersgraft [sic]
deposed and attested in truth, first
Abraham Fransz alone, that nine
of ten months ago, without
recollecting the exact date, the deponent
visited the house of Harmen Becker, here [in this city], were
also Lodewijck van Ludick arranged with
Becker that the latter would take over
Ludick’s claim which van Ludick had outstanding
against Rembrandt according to the last document,
drawn up before the notary Listingh,
and [in exchange] would pay him in cloth, which he showed to him, at f 8.- per ell.
Thereupon van Ludick said to Becker that the
later had priced the cloth too high, declaring:
“I will let you keep all the cloth
you are offering to me,
but give me f 500.- instead.”
Becker accepted this offer immediately,
however then withdrew it, after which
van Ludick said to Becker: “I will let you
keep all this cloth f 500.- less f 25.- [i.e. f 475],” Becker
replied: “I would prefer to get rid of the cloth
than to give you cash in exchange for this document.”
Thereupon Becker paid van Ludick for
the aforementioned document in cloth.
Thomas Asselijn also testified singly
that several days after the conclusion of the aforementioned agreement,
van Ludick told him, the deponent,
that he had traded his claim against Rembrandt to the aforementioned Becker for [a quality of] cloth. And the deponent remarked: “you must have made a good deal.”
In response, van Ludick added:

[on the otherside of the page]
“what do you mean ‘made a good deal?’
I offered to give the cloth back to him fo f 500.-.”
The deponents offered to support the above by an oath if necessary.
Enacted in Amsterdam in the presence
of Jan Cranendonq and Christiaen
Becker,witnesses.
Attestant: J. Hellerus, / Abraham Franssen
notary public / Thomas Asselijn
Anno 1664 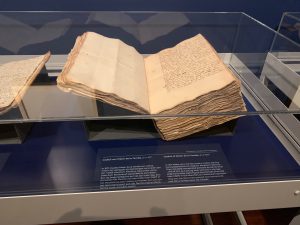