Most of Rembrandt’s family’s time was spent in the salon. This dignified room on the ground floor, above the kitchen, was used a living room, and the man and lady of the house slept there at night. It was where Rembrandt and his wife Saskia had their happiest and their saddest moments. It is probably where Saskia gave birth to their son Titus  in September 1641. The following year, at the age of twentynine, Saskia died there on 14 June. Hendrickje Stoffels became Rembrandt’s life partner in 1649.

Hendrickje Stoffels (or Jegher) was the daughter of Sargeant Stoffel Jegher from Bredevoort, near Arnhem. Around 1649, Rembrandt began an amorous relationship with her that became a kind of second marriage. It was never legally formalized however because of the financial requirements of Saskia’s last testament. With their combined wealth invested in an illiquid collection of art and curiosities, he could not pay Saskia’s part of the inheritance to Titus, as she required, if he were to remarry. Cornelia, daughter of Rembrandt and Hendrickje, was born in 1654 and named after Rembrandt’s mother. The pregnancy was likely the prompt for the Reformed Church to censure their non-marital relationship, as ‘whoring’.

Rembrandt depicted Hendrickje in many works of art, including some of the great monuments of his oeuvre, as Bathsheba, a Courtesan, and Callisto. After the insolvency was complete in 1658 Hendrickje also came to play a business role in Rembrandt’s life. In order to shield themselves from his creditors, she established an art dealership jointly with Titus through which Rembrandt’s work would be sold. Hendrickje died suddenly in 1663 when the plague swept through Amsterdam.

Rembrandt does not appear to have repeated the explicit tribute he made for Saskia for his later love, Hendrickje Stoffels; but, then again, he was not formally married to her. All the same, he made various paintings for which she modelled in which great intimacy is unmistakable. Hendrickje can be identified as a rather stocky woman, with the round forehead and firm cheeks that appear in various drawings and paintings by Rembrandt in the 1650s and early 1660s. One of these paintings is a portrait, but more often than not she served as a model for a mythological figure or other personage.  This painting from Frankfurt that has only recently been reattributed to Rembrandt is an exception. According to he latest thinking, it is one of a group of paintings that he made as studies into various problems encountered by painters, in this case very unusual lighting.

The light comes not from upper left and from the front, as was customary in the seventeenth century, but directly from the left. As a result, even the shoulder on the right catches something of the incident light. The head is turned to the right, causing  an unusual distribution of light and dark areas on the face that Rembrandt wanted to study and record. Hendrickje’s loose garment of gleaming silk (highly unusual in Rembrandt’s work) supports the idea that he was primarily concerned here with complex lighting effects. Rembrandt needed a model for a study like this, and Hendrickje was evidently around and available. The composition of the painting reinforces this sense of closeness and intimacy. Hendrickje fills the canvas from the waist up, which means that Rembrandt was sitting very close when he painted her. And there is contact between them: he looks at her and she at him. 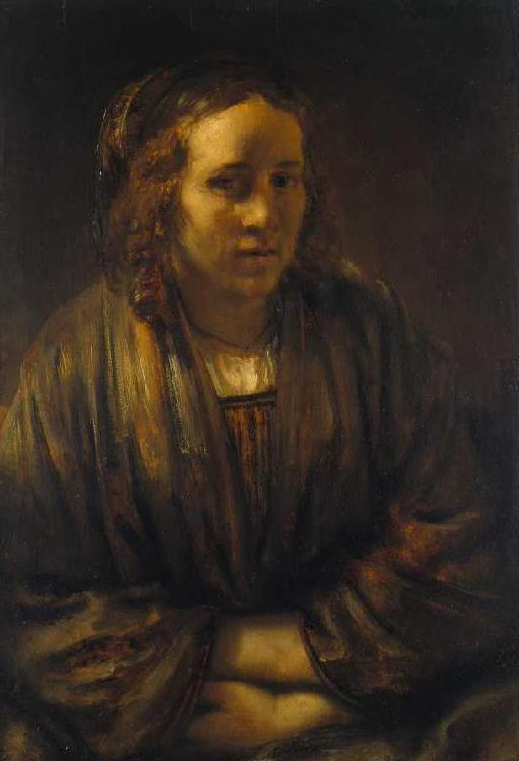 Rembrandt, Lighting Study with Hendrickje Stoffels as a Model, c. 1659