Already at the age of 22, when he was still living in Leiden, Rembrandt took his first pupils. From the moment that he established his own workshop in Amsterdam, the number steadily increased. It appears that Rembrandt played the role of teacher for around fifty pupils. His approach in providing instruction was in some ways conventional, in other ways unusual. He taught his pupils to paint following the rules of art, but he also introduced his own rules. His attitude of curiosity and enquiry lead not only to constant development and innovation in his own work. In his teaching methods as well he constantly looked for new ways to convey his knowledge and technical skills to his talented pupils. Methods from which we can still learn today.

Gerrit (Gerard) Dou
Gerrit Dou was thirteen years old when he received instruction in 1628 from the twenty-year-old Rembrandt. This painting was formerly called `Rembrandt in his Studio’. It shows what kinds of objects a painter could bring together in his workplace, all in the service of art. Or at least in an ideal studio. 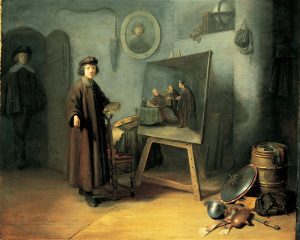 An unknown Rembrandt pupil
This interior view of a studio shows that it was usual for Rembrandt to have his pupils draw from the model in groups. In the final phase of their training they needed to learn how to depict the human figure in a variety of poses. On a shelf in the wall there are casts of sculptures that served as instruction material. 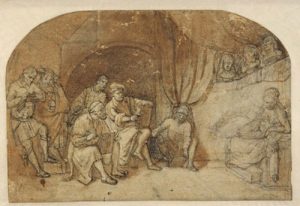 This full-length portrait was painted by a pupil of Rembrandt after a Self-Portrait made by Rembrandt in 1631 (Paris, Musée du Petit Palais). In Rembrandt’s Self-Portrait his legs and feet are largely hidden behind a dog – a poodle – that he added around 1633 in the foreground. Seeing as how the dog does not appear in the work by his pupil, it was likely made between 1631 and 1633. 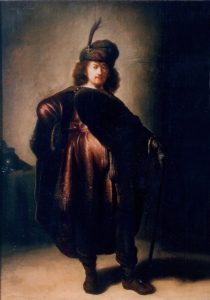 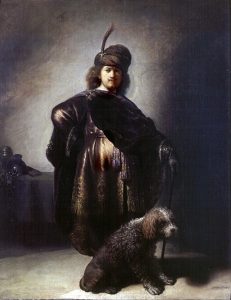