History of the collection

Queen Wilhelmina officially opened the Rembrandt House Museum on 10 June 1911. At the suggestion of the painter Jan Veth, one of the members of the museum’s first board of governors, it had been decided to assemble a collection of Rembrandt’s etchings, which, it was felt, could hardly be better displayed than in the house in which most of them were made. Veth himself laid the foundations for the collection with the temporary loan of the etchings in the Lebret-Veth collection that were of sufficient quality. The first gifts were not long in coming. The first gift of an etching came from Paul Warburg in New York: a fine early impression of St. Jerome beside a pollard willow. 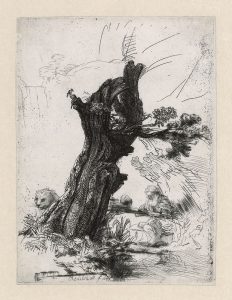 In the same year the artist Jozef Israels gave the new museum six etchings including Abraham’s sacrifice from the famous English collection of William Esdaile. An honorary member of the board of governors, P. Hartsen, deserves a special mention. His generous donations, having helped make the purchase of the house possible in the first place, then continued to add to the buying fund. The Rijksmuseum donated eleven etchings, duplicates from its print room, which have been in the Rembrandt House ever since. 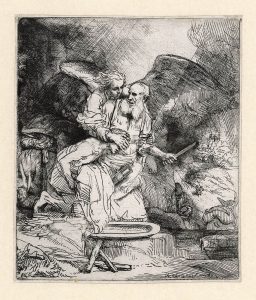 The collection grew rapidly. In May 1913 thirty-three Rembrandt drawings from the famous English collection of J.P. Heseltine were auctioned in Amsterdam. The Rembrandt House succeeded in acquiring four of these: Woman with a child on her arm , The ruins of the Old Town Hall in Amsterdam, View of the Montelbaenstoren in Amsterdam and Seated girl, sleeping. The Rembrandt House bid successfully at other sales too. In 1914 Jan Veth returned from Berlin with nineteen etchings, including such important pieces as Death appearing to a wedded couple, The large lion hunt and – to bolster the then still poorly represented landscapes – a fine impression of the View of Haarlem and Bloemendaal .

The war years that followed brought a temporary end to the growth of the collection, although in 1915 the Foundation was able to buy sixty-six etchings from Veth’s collection, most of which were already on loan to the museum. They included some beautiful and rare prints, among them The flight into Egypt, etched on a plate by Hercules Segers, and David and Goliath, designed as an illustration for Menasseh ben Israel’s book Piedra Gloriosa (Amsterdam 1655). In 1927 the Rembrandt House was to acquire, as a gift from I. de Bruyn, one of the extremely rare copies of the first edition 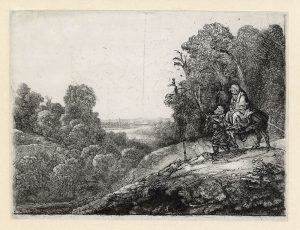 of this mystical work, including Rembrandt’s four illustrations. Other items to come from the Veth collection were an early, heavily inked impression of the fourth and final state of The three crosses and the beautiful little portrait of Rembrandt’s mother. The museum’s collection of drawings was also growing, albeit slowly. In 1919 two sheets came from the estate of the artist Therèse van Duyl, who had bought them at the famous Heseltine sale: the Portrait of an old woman and the Study of a woman with a child on her arm, now attributed to Nicolaes Maes. Not long afterwards another drawing from the Heseltine sale, the self-portrait of the artist in his painting coat, was purchased. This meant that the museum now had the only drawn full-length self-portrait. 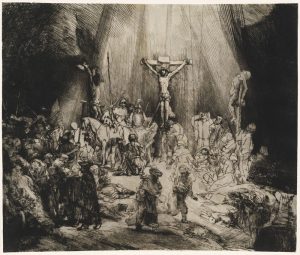 Jan Veth, the museum’s enthusiastic driving force, died in 1925. His successor on the board of governors was the collector I. de Bruyn, who was largely to assume Veth’s role as an adviser. By this time the collection had already become extremely large. But there were gaps, mainly in the early dated prints like the self-portraits and studies of beggars, minority of which were rare. In February 1933 a further six etchings were bought at the Houthakker/Hollstein sale, although the threat of war was already looming large. Directly after the invasion of May 1940 the etchings and drawings were moved into the safe in the cellar. When floods threatened the city in the spring of 1944 the works of art were moved to a safer location in a bank vault above ground, where they remained until after the liberation. 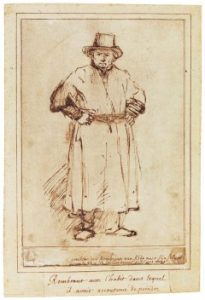 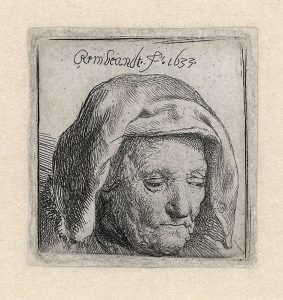 The museum reopened in July 1945. This was followed by a number of lean years. Lack of funds and a shortage of supply meant that few purchases of any note could be made. But in 1950 the museum was able to buy a counterproof of the fourth state of The three crosses: an interesting addition to the states of the print already in the museum’s possession. The most important post-war acquisitions are the forty etchings bequeathed to the Museum by de Bruyn, who died in 1962. These included the very rare first state of the Self-portrait with bushy hair, a fine impression on Japanese paper of Christ and the woman from Samaria from the collection of Pierre Mariette, an early, heavily inked pull of The descent from the cross by torchlight and a beautiful first state of The bathers.

It was becoming increasingly difficult to fill the gaps in the collection. Good impressions came onto the market only sporadically and even then the funds were often lacking – hardly surprising in the view of the way prices have risen. It was occasionally possible to add something – as in 1977, when a drawing by Rembrandt’s pupil Constantijn van Renesse, with corrections by Rembrandt, was purchased with the help of the Vereniging Rembrandt. Other additions have been the etching Man at a desk, wearing a chain with a cross in 1980 and, very recently, the little Bald-headed man in profile and the fourth state of The flight into Egypt. 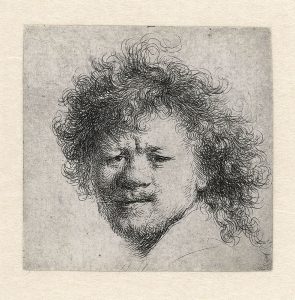 The collection as it now stands provides an almost complete overview of Rembrandt’s graphic work: 260 of the 290 etchings he made are represented. The acquisition of four original etching plates in 1993 was of great importance. Until then they had formed part of a group of 78 copper plates which had remained together since they were first mentioned in the inventory of the Amsterdam print seller Clement de Jonghe. De Jonghe probably acquired the plates directly from Rembrandt. In January 1993 the collection was offered for sale and the Rembrandt House Museum was granted the first right of refusal. Thanks to gifts from various institutions, the government and many private individuals, the museum was able to purchase four of the finest and best preserved specimens.

In addition to the collection of etchings, drawings and copper plates by the master himself, the Rembrandt House Museum also owns a small number of paintings by Rembrandt’s teacher, his pupils and his contemporaries. In recent years the museum has increasingly concentrated its efforts on collecting the graphic work of his predecessors and followers. Among the most important acquisitions are prints by the Leiden artists Jan Lievens and Johannes van Vliet, both of whom worked closely with Rembrandt. The collecting policy does not, however, focus solely on artists who were directly influenced by Rembrandt. The museum has spread its net wider to include his later European followers, among them many eighteenth-century German and Austrian artists. The collection now includes etchings by Christian Wilhelm Dietrich, Georg Friedrich Schmidt and others. And finally, there are the specialist areas of copies after Rembrandt and the many reproduction prints after his drawings and paintings.